GERMANY - A COUNTRY THAT NO LONGER HAS ANY PLACE IN THE EU! THE BAD SPY OF EUROPE & THE END OF THE INSTITUTION!!! 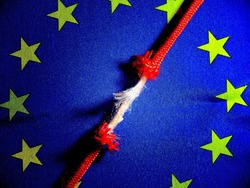 Friends of the EU, unfortunately the conditions force us to remain on the same issue this time as well, after the results of the last Summit.
Unfortunately, we were once again justified. Summit meeting did not have time to expire and Erdogan ridiculed them all by reinstating the threat of war, violating EU borders and its members, doing whatever they want in the Aegean and the Mediterranean without anyone reacting! After all, who is making fun of whom and when will this endless, extreme and pompous mockery of the leading power towards its allies cease?
When will he respect the institution and its member states? The answer of course is one and indisputable, this will never happen!

He had all the time to do it and he did not do it. Instead she activated all her forces to cancel it by transforming him into a clinically dead patient!
However, for us this is not news. In recent years we have repeatedly referred to the reasons why Germany must be expelled from the institution, if we really want to preserve it, our peoples and our countries!
Please see related articles on our main page by clicking here.

At the same time, we must not forget, as European citizens, that the EU institution was founded on some pillars following the advice of its visionaries and that one of them is represented by the saying "Power in union"!
However, we had warned that this institution is the first potential danger for the Germans as it dynamites their plans as long as it exists, which is why they are still fiercely opposed to its strengthening and the implementation of the terms of its statute, such as in the creation of the Armed Forces, finally managing to deactivate it as an institution and entity!
It is truly unthinkable for 70 years now that all the leaders of Europe, have left this country of unrepentant Nazis that stained the whole of Europe - and not only - with its horrific crimes by sending 120,000,000 people to death, to put them back under the occupation of all the peoples of Europe, having methodically built the 4th REICH establishing its new empire!

Citizens of all the European countries, we must all finally realize, as European citizens, that with the Germans at the helm of the EU and with Turkey remaining in these ridiculous, paranoid and out of place and time dangerous claims against our peoples, recalling "its former conquests", it is now inevitable that we will be led to the worst and most unfortunate scenario, to a 3rd Global War, in a war that both countries look forward to great economic and geopolitical benefits!!!

What more can we expect from these countries and their leaders, in addition to all that they have been saying and doing for so long openly to the detriment of the EU member states, using sneaky and fraudulent ways to understand their common goals and designs;
How is it possible for us, as members of the institution, to accept this shameful deception and mockery without reacting as countries? SHAME!

And while "signs and monsters" are happening, we all remain apathetic and spectators in this theater of the absurd, to see the neo-Nazis and the leading force of the institution united with its leadership caressing its neo-Ottoman aspiring conquerors Europe and the chancellor to state emphatically through her absence from the events of the 200 years of polygenesis of our Nation what she wanted to say!
A defeated position that proves its real intentions once again by choosing to stand openly on the side of Turkey, exceeding all limits of provocation, when it directly threatens Europe and its member states with war!
SHAME, SHAME & SHAME! THIS COUNTRY CANNOT BE AN EU MEMBER ANYMORE; IT IS THE "NIGHTMARE" OF EUROPE'S THERMOPYLES, THE COUNTRY THAT BETRAYS THE INSTITUTION & THE ALLIES! IT IS THE EU CANCER, THE ONE WHICH WILL FINALLY LEAD THE INSTITUTION TO ITS DISCRIMINATION & AT THE END!!!

European citizens all over the world, there is still time to safeguard Europe and our peoples, before the ship falls to the rocks and with it sinks any hope of rescuing the institution, changing course and captain in a timely manner!
See the latest interview of E. Macron in N. Aliagas, his reports and his goals. His positions after this interview come to substantiate our views, that the President of France is a great asset to Europe and the only hope for the salvation of the institution!
He is the ambassador of its values ​​and principles, the leader who must be supported by his counterparts and who can guarantee its fundamental transformation by creating its second pillar of support, the one dictated by the logic and the statute of the institution and which will the security valve for the protection of our borders and our peoples, the eternal guarantee for the future of Europe, the creation of the Armed Forces and one of the strongest armies in the world, something it can do through its very own selves  and its members!

As for Greece and its relations with France, what can we say about them! A friend and ally country that unites us so much, ideals, values ​​and principles, a true friendship between our peoples, which now having common geopolitical interests, is an opportunity for our countries and a duty for us after their last stand to stand by us, to respect them and to honor our relationship by cooperating with them in our armaments programs, at the same time proceeding to the signing of a joint Agreement on Military Solidarity and Bilateral Alliance, strengthening our ties to jointly repel any of our enemies!

Finally, we must not fail to say that, unfortunately, the same is true of the NATO institution, which President Macron also denounced as clinically dead. Another discredited institution that is also dragged towards its dissolution, when it is annulled in essence by the non-application of article 5 of its statute, which is the quintessence of its existence and which stipulates: "Any threat and attack on any its member country is an attack against the institution and all its members and must be dealt with collectively by it, safeguarding its member country, proceeding to the use of armed force ''!!!
Instead, unfortunately, we see NATO and the its representatives Stolberg and Merkel conspire together for a country that directly threatens its members as well as the whole of Europe, allowing it to attack and violate their sovereign rights, ignoring this, as well as the implementation of its statutes !!!

After all the above, what can one expect from these discredited institutions and their representatives Merkel and Stolberg?
The answer of course is nothing. We are talking about the mockery of our peoples and the absolute derailment of the two institutions that in essence no longer exist!!!